MySpace Muvi Review- â€œ Judgemental hai Kyaâ€ Bravo Kangana Quirky Ranaut hits the ðŸŽ¾ outta stadium with her histrionics. Seeing Kangana is at times scary as she plays these delusional characters so well, itâ€™s hard to believe who is the real person?? Kangana as Bobby suffers from Acute Psychosis and she visualises things and characters like a cockroach indicates that she is never well n needs her meds. She is also a dubbing artist who likes to get into characters she dubs for and has a penchant for framing photos in those characters..Her agent who wants her to be his steady gf but ends up doing her errands says that she is not normal and there are people in her head. Move in tenants Rajkumar Rao and Amyra Dastur a couple in love with husband who just lies sweetly that he doesnâ€™t smoke or eat nonveg..A lie is enough to break a heart but in Bobbyâ€™s case the voices come from her stomach and she feels the wife will be murdered by her husband..Yes an accident happens and Kangs tries to point fingers at Keshav aka Rajkumar..But same time Kangs seems obsessed with Keshav and in her pursuit to kill the cockroach, has done things that point her..She also imagines herself in Amyraâ€™s place The director Prakash K is a favourite since his classical movie Morning Raaga n here too he brings in the classical Alagiri Nandini as a strong bgm.. The movie plays with your mind, as at times you do not know who to believe..The movie shifts to London where she lands at a pregnant Amrita Puriâ€™s house. Amrita is her cousin and her husband is yet again RajkumarRao who swears and nags as he feels scared that Amrita will be killed by Kangs and Kangs who lands the role of Sita starts hurting people, sees friends in guises of Ramayana characters trying to guide her to reach her truth and her truth again is that Keshav is going to kill her cousin..Yes now she imagines herself in Amritaâ€™s place Kangana acts crazy like a lot of her characters in past and she is brilliant as you canâ€™t afford to move your eyes away from her. Her agent n friend Hussain Dalal is funny, Rajkumar is charming and again awesome, Amrita and Amyra cute and Jimmy apt in his role though has no scope. Climax is dramatic but the thriller is an end to the bewildering story that surprises you.. Kangana basically personifies herself in the end when she says â€œI am mental and in a different world. I live on my terms â€œ 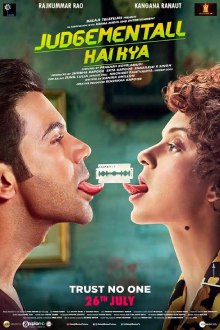