This movie songs are sung by Swaroop Khan and Jyotica Tangri playback singers as well as music composed by . Download songs mp3 audio 128kbps and 320kbps.

Annie (Athiya Shetty) has rejected a long list of suitors arranged by her parents on the condition that she will only marry someone settled abroad. So she can not only live there but also post photos on social media to make her friends jealous. Pushpinder (Nawzuddin) on the other hand is so desperate to marry now that he is willing to settle for anybody. His mother (Vibha Chibber) however is hoping to marry her son off only against a fat dowry. In due course, Annieâ€™s aunt (Karuna Pandey) convinces her to consider Pushpinder as an option to marry, because he fits the bill of living abroad. But does he? Motichoor Chaknachoor tries to capitalize on the small town milieu and the usual mix of quirky characters that we have often seen in movies set in Northern India. So you have two sets of joint families and most of their time seems to be divided between eating copious amounts of jalebi and kachoris and trying to find the required bride and bridegroom for their respective off-springs. While it may have been intended as a quirky comedy of a so called misfit couple, the tedious chain of events in the film makes it a tiresome watch after a point. And although it tried to be a social satire, many of the dialogues and scenarios are problematic. On the up side, there are some genuinely funny moments. Nawazuddin shines in some of the comic and emotional scenes. Athiya Shetty makes a sincere effort and pulls off some scenes impressively. Karuna Pandey as the aunt and Vibha Chibber as the mother make an impact. And filmâ€™s soundtrack is pleasant. Overall, Motichoor Chaknachoor comes off as a mixed bag that leaves a lot to be desired in the execution department. The Final Verdict: A Tedious Affair 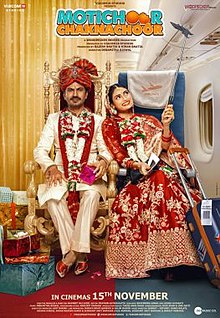