The title is clear enough to say what the movie would revolve around. The story of a common man who is desperately struggling to give his child the best education taking any means possible to accomplish those goals because only the ability to speak in English is the mode of judgement and understanding of people's educational levels. Alongside this major plot development, there are other aspects easily noticeable. One of them is the comment on western form of education and the effects it has. The consultancy in the film, the Western education are shown to fill people with artificiality, superficial knowledge, snobbishness, pride and also lack of respect for their own language. Not only the children, the parents equally are a part of that change due to this form of "education". Due to this "education", class of people has been created who call themselves "the elite". Sharply contrasted with the "non elite", the difference of not just lifestyles and sophistication is shown but also the difference of the basic humanity in both the classes is clear and obvious. The first and the second half show the protagonists in totally different lights and hence their characters undergo development and transformation. The other aspect, which could also be called an suggestion or maybe an eye opener is that all children, irrespective of their class, deserve equal attention, care, respect and quality education because they too have equal brain as any other and are equally creative. The example of being creative is also shown in the movie where the children create music without any musical instruments. 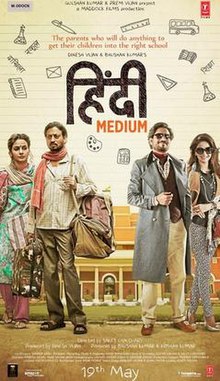