Editorial Review About Student of the Year 2 Songs

Movie Review: Student Of The Year 2 Rating: â­ï¸â­ï¸ Karan Johar backed film, two pretty newcomers, successful prequel, insane promotion, nepotism controversy, big banner release after a hiatus...phew! SOTY 2 has enough reasons to pull the crowd in movie halls. But have they done justice to all the hype and hoopla? While SOTY was about 2 boys falling for same girl, here the equationâ€™s reversed. Tiger Shroff takes admission in a prestigious college in Dehradoon to pursue his love interest Tara Sutaria. He accidentally bumps into rich but emotionally vulnerable Ananya Panday and her sports competitive brother Aditya Seal in the same college. All of them get tangled in love-hate-ego war which culminates with prestigious Student Of The Year trophy going to the best athlete. The story offers nothing new over SOTY except for some fight stunts. Even if judged on pure merit, without further comparison, the movie has very ordinary sets, lacklustre pace, average music & poor storyline. It is difficult to say which genre the movie belongs to because it isnâ€™t very romantic, neither comic, nor drama and least thrilling. Coming to the star cast. Ananya Panday has the freshness, spark and chutzpah befitting to a newcomer. Not the best but still, promising. Probably, Chunky Pandayâ€™s only worthy contribution to Bollywood! Tara Sutaria needs improvement. She is expressionless most of the time. Tiger Shroff is average. The guy is anyways not known to be a great actor, so no complaints. Taekwondo champion Aditya Seal is also passable in negative role. Rest of them were pathetic in whatever little they did on screen. So, is it really not worth a watch? Well, if you are still in your teens, love chiseled body and gymnastic manoeuvres of Tiger, like to drool over Ananyaâ€™s cuteness & Taraâ€™s hotbod or get mesmerised with their stylish wardrobe which most can never fit in, then go for it. Rest of you should enjoy IPL finale or endless political debate and election campaigning which is stooping down to new low every day or better still, watch SOTY again, at the comfort of your couch. Sadly, the sequence is disappointing! 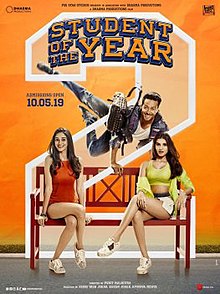