One of the best movies ever !!! Everytime I watch it , I laugh the same and I've watched it like a million times ! It's simply hilarious . Everything about the movie is so perfect , the characters , the acting , the songs , the story , the dialogue delivery and even the filter . That old picture quality might not be the best but it has its own homey feeling , it gives the movie a unique identity . All the portrayals are brilliant and of course the comedy legend - Paresh Rawal's performance was so exquisite that even after two decades his character Baburao is known by all and he has made the movie one of Bollywood's biggest comedies ! I hope the trinity returns to the set for an epic third part with the same aura that the first movie had . 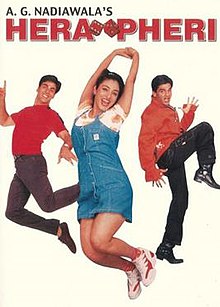