Young London-based doctor Manu(Maddy, setting the screen and the hearts of the female population on fire)comes home to visit prospective bride Tanu(Kangana), for an arranged marriage, and ends up falling in love with her at first sight. However, Tanu's affections lie elsewhere(said affections subject to change every other month). I enjoyed the reversal of the 'good girl loves bad boy' trope, and Maddy makes for an especially sweet good boy. Manu's character is solid and endearingly played; you get why a guy like him falls so desperately in love, especially with someone like Tanu(opposites attracting and everything). But her character is nebulous and vague, you never quite get why she is the way she is, what motivates her actions, does she ever stop to think of the consequences of her selfishness, etc. I rather hoped there would be a back story, maybe to do with Tanu's turbulent relationship with her parents(you're told it's turbulent but it's never established). Even if she is just a rebel without a cause, you don't get a growing up scene to validate her sudden change of heart. You don't see her reacting to Manu much, there just aren't enough scenes between the two to show how Tanu's feelings for Manu strengthen. After a point I started wondering how someone as grounded as Manu can stay in love with someone like her. Kangana's potential is sadly underutilized; but she does the best with what she is given. The actor playing Pappi, Manu's friend and confidante, does a great job at offering comic relief. On the whole, the movie is a good one-time watch. 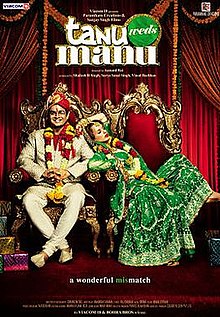